The lovely town of New Mills started out as a mining colony named Bowden Middlecaleduring the Medieval period. The settlement, which started off with just ten hamlets, quickly grew in size by the fourteenth century when it became the regional milling hub of farm produce such as corn and wheat. By then, the village became known as New Mylne. Within a couple of decades, the manufacturing sector in New Mills became larger as cotton mills and print-works were built owing to the easy availability of water, coal and iron. By the early 19th century, the area could boast of at least 12 mills (cotton and weaving) and three print-works. It became one of the most important strategic centres for the textile industry.

Alas, the depletion of coal reserve in the area and growth of mills in surrounding areas eventually saw the mills and print-works in New Mills closed down by the first half of the 20th century. This triggered a mass migration which only stabilised by the middle of the century. Today the economy of New Mills has changed drastically, and the largest employer in the town of 12,000 is a sweets and confectionary manufacturer. 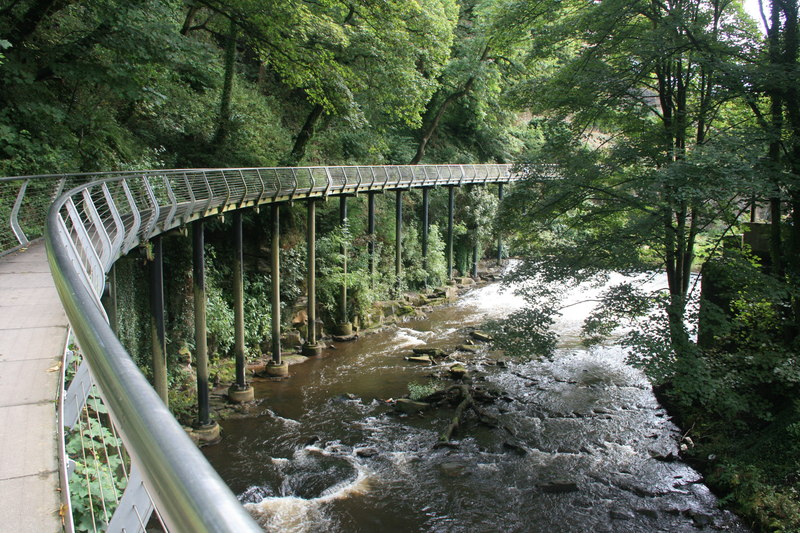 The Torrs Millennium Walkway in the Torrs Riverside Park.

New Mills boasts of a dramatic topography highlighted by deep, water-carved gorges (the standout is The Torrs), rock faces and beautiful flora. The High Peak area alone contains 32 designated conservation areas, as well as many marvellous trails, such as the Sett Valley, Trespass and Town trails. If you prefer something more posh, the 175 yards aerial walkway, Millennium Walkway, built at a cost of £550,000, offers stunning design and views that will take your breath away.

In town centre, there are a large number of restaurants, pubs and cafes featuring a wide range of cuisines. These outlets tend to get extra crowded during days when New Mills A.F.C. has a game scheduled at Church Lane, so please planned accordingly.

If you require additional help, the New Mills Heritage and Information Centre is open daily between 11.00 a.m. and 4.00 p.m.