New Mills A.F.C. is one of the oldest football clubs in the country. Informally established in 1886, the club played an important role in the early development of professional football in England through its observance of the newly introduced Laws of the Game by the fledgling Football Association. It became one of the regional hubs of footballing activities in Derbyshire. According to The Story of the Millers, a pamphlet published by the club in 1974 to celebrate its Golden Jubilee, their original ground was located near a railway viaduct by the River Goyt.

It was not until 1903 that the club was officially chartered as New Mills St George's, in honour of the Parish Church of St. George's, which was located near its second home in Millfields (now Ollersett Drive). Since the facilities at the ground were non-existent, players used the now-demolished Bull’s Head public house in High Street as their changing room.

According to an archived copy of the Derby Daily Telegraph dated 10 August 1904, New Mills St. George's (alongside Chapel-on-le-Frith) applied to play in the Stockport and District League. Their application was accepted and the club went on to play in the league the following season under the leadership of club secretary, Mr. Jim Hewitt. 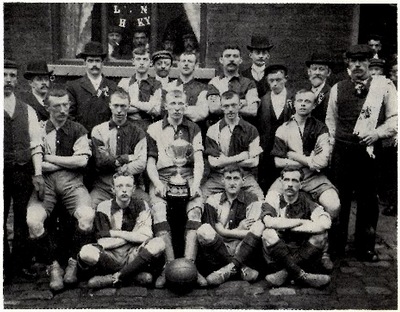 New Mills St. George’s 1905/06 squad.Club captain Sammy Marsland can be seen with a trophy in the centre. Image obtained from The Story of the Millers’ pamphlet published in 1974.

What transpired next was unclear, but the club was forced to move several times over the next (almost) two decades. They eventually settled down at Church Lane in September 1922, and the ground has become its permanent home since.

Nicknamed affectionately as The Millers, the club played in regional leagues and cup competitions continuously until 1982 (except during World War II, obviously) when financial problems forced the club to withdraw from the League. Thankfully, local amateur sideBirch Vale and Thornsett FC took over the management of Church Lane, and after stabilising the financial situation, renamed themselves as New Mills FC to keep the history of the iconic sporting institution going.

Following the disbanding of the Lancashire Combination and Cheshire County League in the same year, New Mills F.C. became one of the founding members of the new North West Counties League. They have been part of this league since, and are currently playing in the Division One Southof the North West Counties Football League (officially known as the Hallmark Security League until 2020).

The club, currently under the ownership of Mr. Ray Coverley, the club chairman, and partner Sue Hyde, is entirely self-funded through facilities rental, gate receipts and sponsorships.